We’re there… This week, amidst one of the worst one-day declines in the past decade, a portion of the treasury yield curve inverted. What is “inversion?” Inversion, also referred to as “going negative,” is the term used to describe a unique shape of a yield curve. Typically, the yield curve is upward sloping, and intuitively that makes sense. The further out in the future you are willing to borrow or lend, the higher the interest rate charged or received. For the most part (in the chart below), that is the shape of the treasury curve today – except for the kink between years two and five. 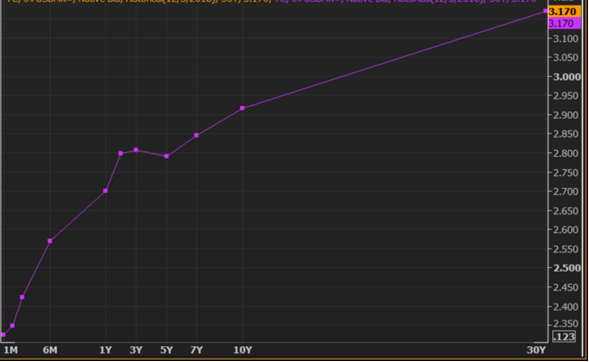 So, what does it mean (both for interest rates and risk assets)? The curve pictured above is made up of individual bonds with different maturities. It seems strange, but today investors will be paid a higher yield for owning a 2-year note than owning a 5-year note. Intuitively, that seems wrong. What the market is telling us (indirectly) is that you can own that 2-year note for the next two years at a higher rate than the 5-year note, but when the 2-year note matures (and an investor needs to reinvest the proceeds for another three years to match the maturity of a 5-year note today), there is a risk they will be reinvesting at lower yields than are available in the market today. When you blend the higher 2-year rate with the lower, future 3-year rate, you potentially end up no better off than simply buying the 5-year note today.

This condition could also be forecasting a rough patch in the US economy approximately two years out. The yield curve is one of the strongest recession indicators available to market participants, but it leads sometimes by years. At best, historically an inverted yield curve signaled “the beginning of the end” but not “the end.” After the 2-year, 10-year portion of the curve (or 10-year yield minus the 2-year yield) went inverted in mid-1998, the US equity market ran up another 40% before peaking in early 2000. Granted, the market fell over the subsequent two years well through the levels of the mid-1998. This time could certainly be different, and we as a team often consider it’s possible the shape of the curve will be less predictive going forward because the overall level of interest rates is considerably lower than history. Additionally, while not explicitly written there does appear to be an implicit “Fed put” in the modern era of the Federal Reserve.

Another point worth mentioning is that although the curve appears flat now (with approximately 0.85% spread between the 1-month treasury bill and the 30-year treasury bond), in both of the past two recessions the curve managed to completely invert across all points. This leads us back to the idea that it’s an early warning sign and time to reevaluate risk in portfolios.

With 16 trading days left in 2018, US equity markets are tenuously holding on to gains of 2.4% (inclusive of dividends) – down over 8% from the September highs. Shortly (if not already), the focus will turn toward 2019 and earnings. We won’t be surprised if calls from the investment community to “focus on earnings” commence and grow louder through Q1. Consensus expects $176/share earnings for the S&P 500 in 2019 – down 1.5% since September of this year which leaves the index at a P/E multiple of 15.3x next year’s estimated earnings. That’s not cheap, but it’s also not incredibly expensive. For reference, if the S&P 500 index had been up as much as earnings were this year (23.4%), the multiple going into 2019 would be 18.4x.…

Bottom-line: we do not believe the end is upon us, but volatility is here to stay and it’s time to prepare for the end of a cycle.

The views expressed in this newsletter represent the opinion of Custos Family Office, a Registered Investment Adviser. This material is for informational purposes only. It does not constitute investment advice and is not intended as an endorsement of any specific investment or services.  The information provided herein is obtained from sources believed to be reliable, but no representation or warranty is made as to its accuracy or completeness. Investing in equity securities involves risks, including the potential loss of principal. While equities may offer the potential for greater long-term growth than most debt securities, they generally have higher volatility. International investments may involve risk of capital loss from unfavorable fluctuation in currency values, from differences in generally accepted accounting principles, or from economic or political instability in other nations. Past performance is not indicative of future results. Investments are not a deposit of or guaranteed by a bank or any bank affiliate. Please notify Custos Family Office if there have been any changes to your financial situation or investment objectives or if you wish to impose or modify any reasonable restrictions on the management of your accounts through Custos Family Office.