The Price of Money

Last Friday, despite finishing the day 6 bps lower, the 10-year hit 3.128% (Chart 1). This is the highest level we have seen since July of 2011. You might remember that in early August 2011, the rating agency Standard and Poor’s downgraded the sovereign debt of the United States for the first time. In the subsequent two months the S&P 500 fell nearly 20%, which is the largest pullback in what has now been nearly a decade since the financial crisis. 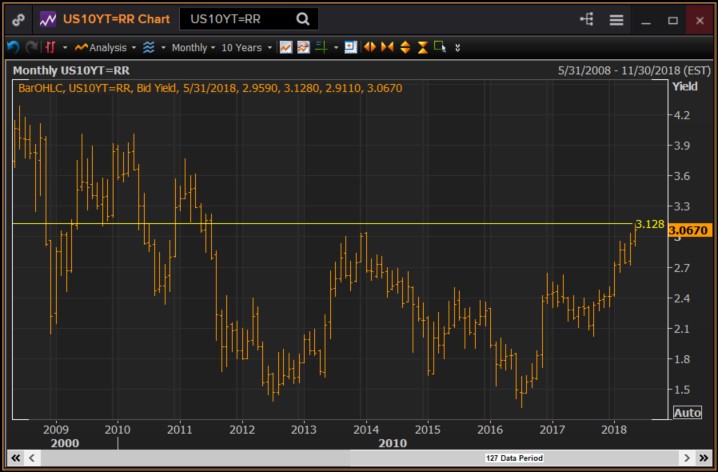 Similarly, the 2-year US Treasury is trading even higher relative to its 10-year average than the 10-year note. What may be more interesting: the 10-year Treasury is now trading at a higher yield than the Federal Reserve’s long run central tendency of 2.8%-3.0% (i.e. the Fed’s expectation for where the Fed Funds rate will be longer term). Historically, the cycle high for the Fed Funds rate has been a fairly good predictor of the high in 10-year yields: in the late 90’s the Fed’s target rate topped out around 6.50% and the 10-year treasury hit 6.87%. In the mid 2000’s, the Fed’s target was set at 5.25% and the 10-year treasury peaked at 5.33%.

Why does this matter? Think about interest rates as the “price” of money. Interest rates are the price at which all market participants in an economy borrow and lend to each other. Take housing for example – when individuals look to buy a house they rarely care what the purchase price is. What matters most to the individual (and the institution making the loan) is the monthly payment – can the borrower service the debt on a monthly basis?

According to the MBA, in the summer of 2016 the average 30-year fixed rate mortgage bottomed out around 3.60%. You could borrow 30-year money to buy a home and lock in 3.60% for 30 years. This probably sounds like quite the deal to you early 80’s borrowers out there. Since then, that same rate has risen over 100bps to 4.77% (Chart 3). The cost of money has risen considerably in less than two years. During that time, a robust economy and low supply have pushed up the median selling price of homes (Chart 4). Between the increase in median prices and the rise in borrowing rates, this implies a more than 25% increase in monthly payments over less than 24 months.

We will conclude with one other data point which is relevant to everyone, regardless of whether you own or are looking to buy a home. During the last fiscal year, the US government paid $310B on the public portion of the country’s $15T of debt (these figures do not include the intragovernmental debt), approximately 2%. Just 10 years ago, the current yield on government debt was 5%. If we were to return to a similar interest rate environment (and assuming the Federal debt does not grow – it will) we would spend approximately $750B per year on debt service. That’s nearly 20% of fiscal year 2018’s entire budget and it would make debt service equivalent to half of discretionary spending. We would spend more on debt service than our military.

There is another (brighter) side to this story. After years of financial repression, savers are finally allowed to earn something on their cash, but you might not know by looking at your bank statement. Intermediate municipal yields are now solidly north of 2.00%. Even ultra-short duration municipal securities are yielding approximately 1.50%. On a taxable equivalent basis that’s not too bad. Just two years ago, an investor would have had to take on significant duration and/or credit risk to achieve the same yield.

So the price of money has gone up, which slowly but surely shifts the benefit back from borrowers taking on leverage to savers flush with cash.