Real Estate – The Tail That Wags the Dog?

One theme that has been constant over the past nine years (since the official end of the Great Recession) has been the hunt for the next recession. This expansion is officially the second longest in history at 108 months, overtaking the 1960s expansion by two months and bearing down on the longest expansion in history of 120 months in the 1990s.

While outside the scope of this post, the parallels to the 1960s are interesting…. Both periods were marked by prolonged military conflict. The 1960s expansion was completely contained inside the Vietnam war and today’s expansion is covered by, what seems like, perpetual conflict on multiple fronts. In the 1960s, inflation troughed in the early part of the decade below 1% (y/y) and ultimately brought the expansion to a close at just north of 6.0% (y/y). In 2009, year-over-year inflation bottomed at around -2.0% and June’s inflation reading (released 7/12) hit the highest level in over five years at 2.9%. Interestingly, unemployment bottomed in the late 1960s at under 3.5% and earlier this year the unemployment rate dipped to 3.8%.  Finally, wage growth in the late 1960s peaked just above the inflation rate around 6.5%. Today, wage growth is closely tracking CPI at up 2.7% year over year in May. All of that said, certain aspects could not be more different – GDP growth during the 1960 expansion was 4.9% vs 2.2%, employment growth was 3.3% annually vs 1.4% during this expansion.

Could the same market that took us into the abyss over a decade ago – the real estate market – do it again? In May, we penned a piece on our website titled “The Price of Money.” Fortuitously, the day we wrote the article the 10-year treasury hit the highest level in over six years and marked, at least to this point, the top in yields. The article also touched on the impact of rising yields as it feeds through to the rising cost of home ownership. In 2013, a similar increase in mortgage rates resulted in a nearly 10% decline in existing home sales. As yields fell over the following 2.5 years, sales quickly retook the highest levels since the housing bust. June existing home sales were down almost 6% from the post-recession peak in late 2017. The difference this time is that the median sales price of an existing home is $60,000 (or 30%) higher than it was in 2013. 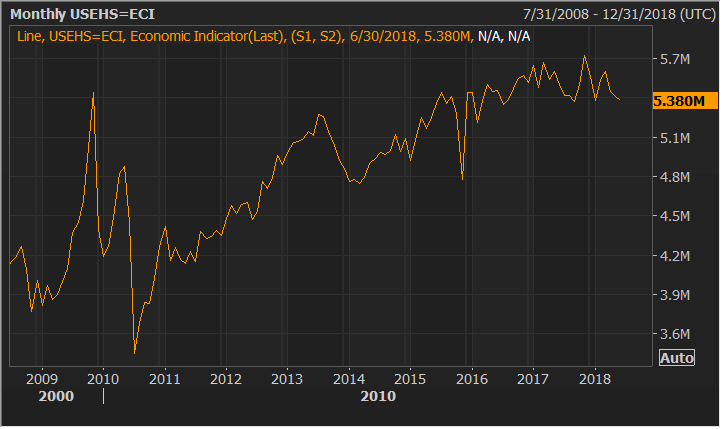 This week CNBC put out the following ominous headline, “Southern California home sales crash, a warning sign to the nation. (1)” While the headline decline in home sales of nearly 12% stole the show, prices remained robust rising 7.3% year over year. If you are a current home owner, the decline in transactions means very little to you as the increase in prices drives up the equity in your home. If you are in a career field tied to transaction volume (mortgage broker, RE agent, title company) however, the decline is more worrisome. Ultimately, the question comes down to whether transaction softness is due to lack of supply, affordability or both. If both, which aspect is having more of an impact? We are inclined to believe the pendulum has swung in the affordability direction. The lack of supply, lower down payments, and historically low interest rates all came together to drive prices to where they are today despite, at best, tepid wage growth.

Will housing be the tail that wags the economic dog? We do not believe that, as it stands now, housing will lead us into the next recession. Housing will certainly not be immune to the next recession, but an affordability issue will not, in our opinion, push the economy into recession. According to the NAHB (2), housing makes up approximately 3.5% of GDP – at its peak it represented 6% of GDP and at the bottom just 2.5%. For a variety of reasons, including housing’s rightsized contribution to GDP, we find it hard to imagine a scenario where a decline in housing results in a technical recession (two quarters of negative GDP).

Finally, we thought it might be interesting to look at the two cities we live in – two of the hottest housing markets in the country. According to the Denver Metro Association of Realtors (3), active inventory for the most recent month in which data is available (June 2018) was up 5.3% year over year to 7,436 homes. Homes sold declined nearly 5% to 5,434 sales. The average sales price rose 8.25% year over year to $492,029. Incredibly, the average days on market declined to 19 days from 27 a year earlier. According to the Austin Board of Realtors (4), the median price for a single-family home in the Austin area was up 5% year over year in June. Total sales were down 3% from a year earlier to 3,299, and the average days on market declined to 44 days, down 2 from a year earlier. Total active listings declined 1% to 7,378 and the month’s supply of homes fell 0.1 month to 2.9 months.

All in all, both are very healthy markets that favor sellers. We will be watching supply and the days on market metrics closely. Peaks form when sellers get nervous. As in any deflationary environment, as prices start to fall buyers delay purchases on the expectation that prices will be lower in the future, thus exacerbating the decline.

Stock pickers are worse at picking stocks than investors may realize, report finds Q3 Recap, Rates, and the Recent Sell-Off