Oh, how quickly things change. We originally planned on releasing our Q3 update after the September payrolls release (10/5) because we believed this would give us insight into the Federal Reserve and whether or not they will raise rates (for a fourth time this year and a ninth time this cycle) in December. While we waited for the data release, something in global equity markets broke – this  post will touch on many different topics as a result.

We will keep the recap of Q3 brief because at this point it almost doesn’t matter. Q3 2018 saw US large cap equities soar over 7% driven by health care, industrials, and technology. Investors were willing to pay up for the privilege of owning stocks  – the S&P 500 multiple expanded from 16.2 to nearly 17x forward earnings. Multiple expansion (i.e. the willingness to pay more for stocks) explained more than half the move in Q3. International markets closed mixed in dollar terms with developed markets up 1.4% and emerging markets down just over 1%. Interestingly, the dollar index rose 0.5% on the quarter while the commodity index also managed to move higher up just over 1% (albeit with a lot of intra-period volatility). We have been and will continue to watch commodities closely. Historically, commodity prices accelerate at the end of an economic cycle as growth and production slows but inflation remains elevated. Thus far, we’ve not seen that.

On 10/5 the BLS released September payrolls data. While the headline for the month came in light at 134K jobs added, the month was heavily impacted by hurricane Florence barreling through the Mid-Atlantic. Unexpectedly, revisions to previous months came in at nearly +90K from previous estimates. The unemployment rate dropped to 3.7% (Chart 1) — the lowest level recorded in nearly 50 years. Weekly jobless claims confirmed the strength of the current labor market is hovering around the lowest levels in, again, 50 years. There is one measure of unemployment that’s not quite at all-time lows: the U-6 unemployment measure (Chart 2). U-6 is the broadest measure tracked by the BLS and it includes categories such as discouraged works and those working part-time but would prefer to be working full-time. The measure was lower at the end of the tech boom, but all things considered, 7.5% is another indication of a tight labor market.

We’ve said it before, but if you’re a young person looking for your first job, a stay-at-home mom reentering the workforce, or currently employed and looking to make a switch, there has not been a better time to do so in half of a century. 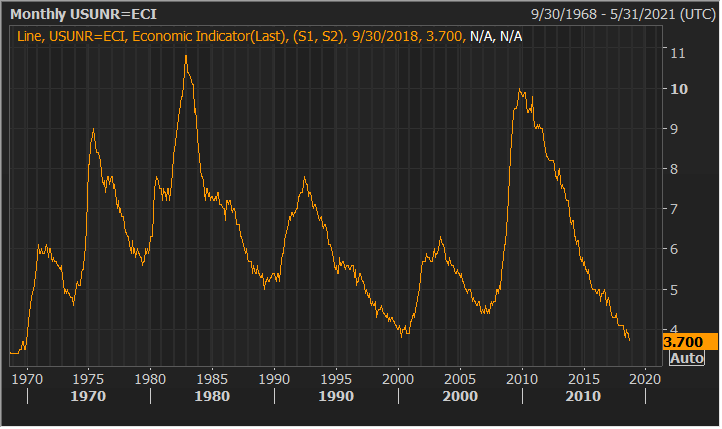 As mentioned previously, just over two weeks ago the Federal Reserve increased interest rates for the third time this year and the eighth time this economic cycle. The board of governors also indicated a willingness to hike rates at the December meeting and continue at a similar pace in 2019. Almost immediately, the “boo birds” came out in full force. Indeed, the President, the man who appointed Jerome Powell (Chairman), criticized the Fed publicly. CNBC had a bit of nostalgia, referring back to Jim Cramer’s famous the Fed “knows nothing” rant. While we understand where the hostility toward Fed tightening comes from,  even we were shocked that all it took was a 10-year treasury above 3% and a 7% pullback in equities from all-time highs for the pitchforks to come out. Like children throwing a tantrum when mom takes away the Halloween candy, this behavior is sure to continue in an attempt to bend the Fed’s interest rate path lower. In our opinion, the Fed has been anything but aggressive and may already be behind.

The first hike came in December 2015. The second did not come for another year (December 2016). 2017 saw three hikes during the year and in 2018 the Fed has hiked once per quarter to the current target rate of 2.125 (3 hikes – see Chart 3). In comparison, the Federal Reserve hiked at every meeting (8 times per year) from June 2004 through June 2006 for a total of 17 times at the end of the last cycle. The truth is not that the Fed hiked too many times or too quickly – in retrospect they should have started hiking sooner. Every day that passes with interest rates at zero the economy and market participants become more addicted to zero interest rates. In real estate, the question, “would you do that deal” is often asked. When the cost of money is zero, the question should be, “what deal wouldn’t you do?” Zero interest rate policy encourages risky behavior, punishes savers and exacerbates wealth inequality as inflation manifests itself in asset prices. For several reasons, but outside the scope of this post, we at Custos think the Fed should be more focused on employment and asset bubbles. Low inflation is only an issue when falling prices discourage investment and consumption which is not the case today. Low inflation is a good thing for everyone, especially low income and fixed income individuals and families. For these reasons the Fed should get to a policy neutral stance as soon as possible and then pause. During the next recession, the Fed should resist the race to the bottom in attempt to save asset prices.

On 9/20, the S&P 500 hit an all-time high, and after trading sideways for the remainder of September, the market plunged precipitously over the first two weeks of October. At this point there are still more questions than answers as to the ultimate cause of the selloff. Our view is it was a combination of several factors that was likely exacerbated by liquidation of leveraged positions. Below is a list of just some of the factors in order of importance (in our view):

We had a client reach out and ask if we should be buying more equities on this pullback. It’s important to put this pullback into context: from intraday all-time highs to intraday lows on 10/11 the S&P 500 was down 7.8%, and from high to low close the index was down less than 7%. In our view, that’s not enough of a move to warrant major shifts in portfolio positioning. With that said, a pullback of 10% or more when the economy is not in a recession is a gift.

We looked at the last 40 years of S&P 500 data – the average annual pullback is 10% when the US economy is not in or entering a recession, and that includes 1987 where the peak to trough decline was 34%. We hear a lot of people throw out various numbers for average annual declines. For example, on CNBC today someone quoted a 17% decline in midterm election years which is higher than the 14% we often hear quoted for any given year. Interestingly, baked into the midterm number are recession year returns in 1974, 1982, 1990 and 2002 with outsized drawdowns. 2002 was not technically a recession year however the market was still digesting the effects of 9/11 and a tech bust with the S&P 500 experiencing one of its worst intra-year declines of 34%.

Bottom line: we do not believe we are in or near recession. While the pullback (so far) is not enough for us to rush out and add to equities, we are getting closer. A 10% pullback would, at the very least, warrant a rebalance and tax loss harvesting if appropriate. With that said, we do not see a reason for equity markets to rocket back to all time highs. At nearly 17x forward earnings the S&P 500 is fully priced. If anything, now that bonds actually provide a reasonable yield we would expect the P/E ratio to come down. Consensus expects 2018 earnings to come in 22% above 2017 aided by the large reduction in corporate tax rates. In our view, this is a risk to 2019 when the one-time impact to earnings subsides. Consensus expects earnings to be up 10% over 2018 which would be very impressive for this late in an economic cycle.

Separate from the Fed policy rate which we discussed above, long term interest rates have been on the move. For most of 2018, short-term and long-term interest rates have been moving higher. The 10-year treasury started the year at 2.43% and just this week briefly touched 3.26% (Chart 4). When you consider just over two years ago the 10-year hit a generational low of 1.32%, it’s fair to question the ramifications of such a move. In a positive sign for the economy, after narrowing for the last five years the spread between the 2-year and 10-year treasury widened. 30-year mortgage rates are now north of 5% for the first time since early 2011 (Chart 5). This is finally putting pressure on what has otherwise been a bulletproof residential real estate market since the beginning of the recovery. On the flip side, CD rates and short-term treasuries are north of 2.00%. Investment grade fixed rate bonds yield 4.50% and floating rate bonds yield 3.00%. The yield on the municipal bond index recently hit 3.00% (Chart 6). We think we are very near a top in risk-free yields. In previous posts we’ve talked about why 3.25% is a good level for the 10-year treasury. For the time being we are embracing putting client capital to work in fixed income at the highest yields in 5-8 years.

Real Estate – The Tail That Wags the Dog? “Are We Having Fun Yet?”