“Are We Having Fun Yet?”

“Are we having fun yet?” We were asked this by a client in late October as the S&P 500 was approaching correction territory. We thought it appropriate to take stock of the month since it was the first month since our inception where the US equity market was negative. We, like our clients, are glad to have that one behind us….

On 9/20 the S&P 500 closed at it’s last all-time of 2,931, up 9.6% year-to-date having recovered from a correction earlier this year. Over the month of October, the market dropped 9.9% and while the index never closed in correction territory, on an intraday basis the market was down 11.5% from all-time highs. Ultimately, the index closed the month down just short of 7% (6.94%). While a calendar month is a somewhat arbitrary time-period, October was the third worst 1-month draw down for the S&P 500 in the last 20 years outside of the 2000-02 & 2008-09 recession periods. 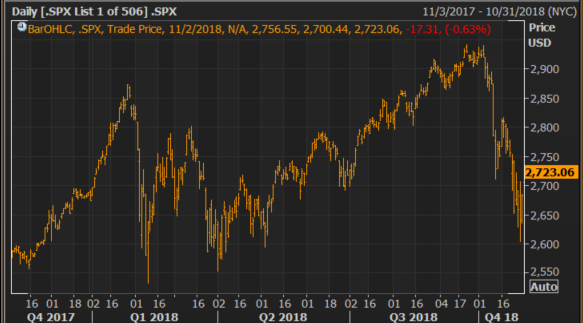 What made last month’s experience particularly painful was the lack of places to hide. International markets underperformed the US and bond indices lost value as the 10-year treasury yield hit the highest level in over seven years (3.26%) while credit spreads widened. WTI Crude also plunged over 10% on the month. The two notable exceptions to weakness in global markets were gold (+1.9%) and the dollar (+2.1%). To some degree, this was an unwind of trades that have worked for years: growth underperformed value on the month by more than 3.50% after a nine-month period where growth stocks outperformed value by 13%.

So, what did we do at Custos? First, while we did not see an imminent selloff on the horizon we thought it prudent to put downside protection in place. We wanted to preserve a 6.5% return on a portion of our equity allocation and we did so by buying protection on 25% of our equity allocation. What this effectively did for our portfolios is turn a 60/40 balanced portfolio into a 45% equity, 40% fixed income, 15% cash portfolio as the S&P 500 dropped below 2,850.

During the month we stayed very focused on US economic growth and earnings. Historically, 10% pullbacks outside of a recession are (almost always) great buying opportunities. We entered the month with the S&P 500 trading at nearly 17x forward earnings per share estimates and we ended the month at 15.4x earnings. Consensus estimates for forward earnings were virtually unchanged on the month. In addition, despite negative price action after several notable earnings releases Q3 2018, EPS expectations (which at this point includes mostly realized EPS) declined fractionally from $41.41 per share to $41.21 at the end of October.

Realized Q3 EPS earnings are coming in at +22% year-over-year with over 70% of the S&P 500 reported. GDP growth was nearly 4.0% again in Q3 and the jobs picture continues to be robust. Q3 will likely be remembered as peak year-over-year EPS growth and we think markets dealt with that reality clumsily. With that said, we believe this holiday season will be the strongest in over a decade and we do not expect the election results to change the outlook for 2019. For those reasons, in the waning days of October we sold our defensive US and International equity positions which had outperformed by 300 bps on the month and replaced them with index exposure. We took advantage of the big increase in volatility in options because, although we weren’t sure if we were at the bottom, we believed we were close enough to take advantage of where risk was priced.

While we are glad October is over (and we look forward to the same with the midterms), we are thankful the market gave us opportunity and that we seized it. Here is to hoping for a Santa Claus rally in 2018.

Q3 Recap, Rates, and the Recent Sell-Off We Have Inversion